The Politics of the Coronavirus 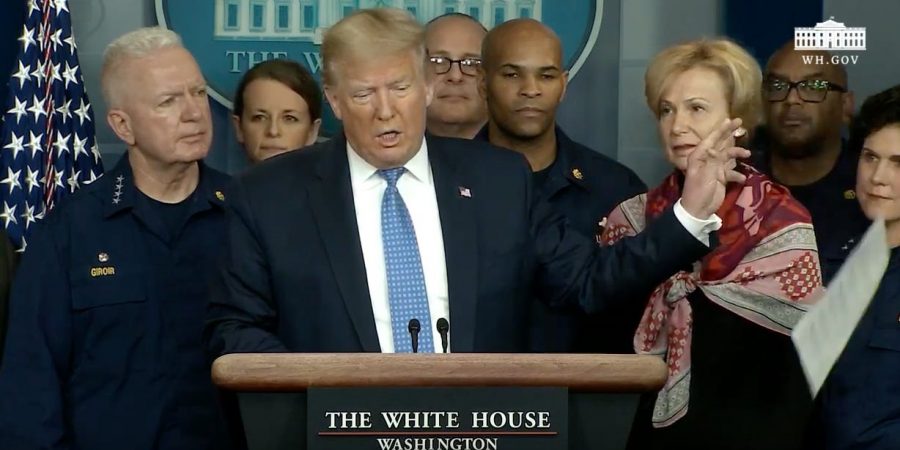 President Donald Trump speaks at a press conference on March 15.

While there is much to be said about the Coronavirus epidemic in itself, there seems to be much more going on than just the virus. The politics behind a national emergency can be overwhelming and seem chaotic, but there are a few simple factors that you need to know.

First, what is a national emergency, and why was the Coronavirus declared one?

Next, what has been done since this announcement?

Since President Trump announced the national emergency status, he has also announced a course of action to speed up the testing process for Americans. The task force announced a private-public partnership between the government and various U.S. companies to implement drive-through testing sites for the Coronavirus throughout the country. President Trump promised 1.4 million tests would be available across the country by the end of this week, and five million by the end of March. Places like CVS Pharmacy, Walmart, Walgreens and Target were mentioned as test cites, but Vice President Pence said more will be announced soon. This development is the only major implementation to come from the national emergency status so far. However, in his Rose Garden speech Friday, President Trump said, “Our overriding goal is to stop the spread of the virus. This will pass…and we’ll be even stronger for it.”

Finally, how will all of these political developments affect our daily lives?

While a national emergency over a medical crisis seems very far from something we would see ripple through Bartholomew County, that is far from the case. Monday morning Columbus Regional Hospital announced the first confirmed case of Coronavirus in Columbus, and it was also announced that the patient had received the illness from community spread, since they have no history of travel. Another recent development in Indiana is Governor Holcomb announced Monday that all restaurants, bars and nightclubs must close their dining rooms and serve to-go and drive-thru customers only. BCSC schools are still to remain closed through April 3, and the first confirmed Coronavirus death has been reported in Indianapolis on Monday as well. The patient was over the age of 60, and had pre-existing health complications.

While there is still much uncertainty surrounding the Coronavirus, we must remember to comply with the five suggested safety tips the CDC provided: practice regular social distancing, wash hands as often as possible, self-quarantine when sick, disinfect surfaces and cover your coughs and sneezes.Many Presidents have declared national emergencies multiple times in the past, and this virus too shall pass. Stay healthy and safe, and stay home if you are sick!