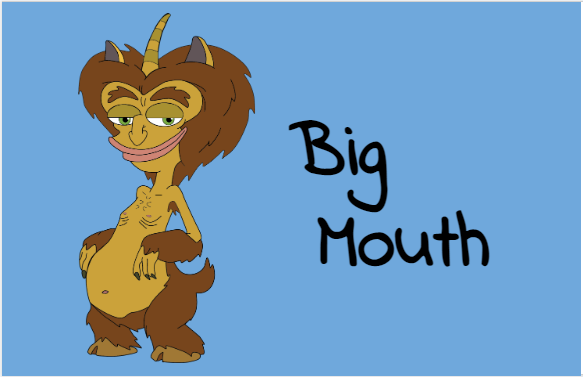 When watching the newly released Season 4 of “Big Mouth,” I was surprised at the considerable increase in vulgarity in every episode. Because the main characters all begin to change and discover the ins and outs of puberty, the show covers topics that would be considered inappropriate for school. It is rated “mature” for sex and nudity amongst other things, even though the main characters are all preteens. However, the cartoon brings awareness to some heavy yet important issues for young adults.

Choosing to make “Big Mouth” a cartoon was a clever choice, making certain scenes possible that would otherwise be difficult to film. In real life, creating characters like the Hormone Monsters would have been creepy. Thanks to the creators, the show is a cartoon with several important characters. Issues that almost everyone experiences, especially after puberty, are personified.

In Season 1, viewers meet Maury the Hormone Monster. He acts as a kind of right-hand man to Andrew Glouberman, an awkward seventh-grader at the beginning of the series. Other Hormone Monsters are introduced as additional characters enter puberty. All of the monsters influence how the kids react throughout the show, often causing them to cry or lash out. All of the characters learn to love and confide in their assigned Hormone Monster.

While these are the most prominent psychological projections, there are several others. In earlier seasons, viewers met the Shame Wizard and Depression Kitty. The Depression Kitty mostly haunts Jessi Glaser, a sarcastic and intelligent female lead. She convinces Jessi to feel bad about herself and take naps often, implying that Jessi has depression.

In Season 4, viewers meet Tito the Anxiety Mosquito, who whispers anxious and sometimes irrational thoughts into the kids’ heads, making them all develop anxiety to some degree. Tito haunts Nick Birch primarily and triggers anxiety attacks for him.

Lastly, Gratitoad is introduced. He helps Jessi feel better and teaches her how to focus on the positive. When she learns the power of Gratitoad, Depression Kitty and Tito become physically smaller, implying that Jessi is learning to manage her depression and anxiety.

Overall, using characters that personify psychological traits is brilliant and adds an entirely new layer to the show. Viewers learn to love and hate certain characters while relating to all of them. Even while longing for Tito the Anxiety Mosquito to leave the kids alone, I found myself understanding that tiny voice and how it made everyone react. Despite its obscenity, “Big Mouth” draws attention to common mental illnesses and feelings that are not usually covered so heavily in TV, let alone in cartoons.