Students Speak: Should the US Leave Afghanistan? 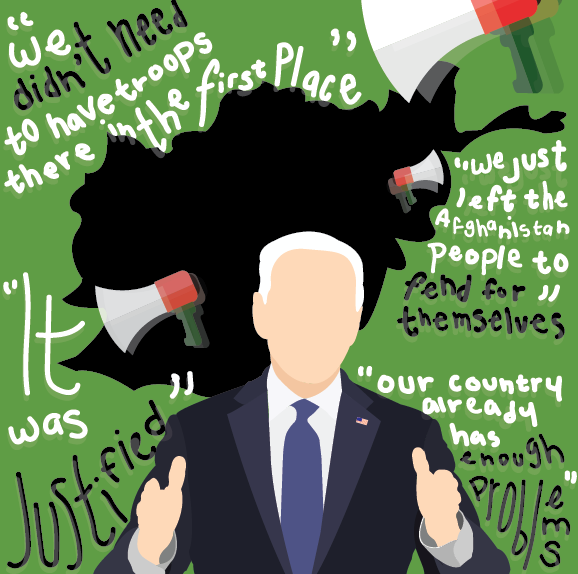 After the Taliban invaded Kabul last week, all eyes have been on Afghanistan. The world has been speculating and calculating: what will the Taliban do next?

This question is a source of fear for Afghan citizens after the last time the Taliban ruled 20 years ago. For Americans, this question is slowly becoming less relevant as Biden pulls troops out of the country.

Since his campaign began, Biden made promises to remove troops from Afghanistan. In a deeply divided United States, 70% of Americans support his decision. Republicans and Democrats alike have given Biden the thumbs up on ending the forever war.

Americans young and old, including students from East, have been weighing in on the matter.

“We didn’t need to have troops there in the first place. I think this is the only smart thing Biden has done in his presidency,” freshman Eric Duncan said.

Additionally, many Americans believe that it’s time for the United States to focus on its own issues.

“Our country already has enough problems of its own and I feel like we have already sacrificed too many of our soldiers to a cause that probably is not going to help,” senior Jordan Spurgeon said.

After 20 years of United States involvement and trillions of dollars spent on training Afghan troops and providing resources, American citizens are ready for the government to pull the plug.

“I feel that, given the circumstances, that it had been planned and promised by multiple presidents over the years that it was justified,” junior Jack Beckley said.

While Biden has the support of the majority of the country, some believe it is immoral to back out now. After President Ashraf Ghani fled the country and American diplomats evacuated, the innocent citizens of Afghanistan have been left in the hands of Taliban rule.

“We just left the Afghanistan people to fend for themselves. It’s chaos over there now. It was chaos before, but now… there’s people jumping off planes,” freshman Jack Smith said.

In a time of chaos and violence, America has to make a decision about where to stand with the rest of the world. The support for Biden’s choice reflects the ideology of the American people in the midst of an ongoing war.