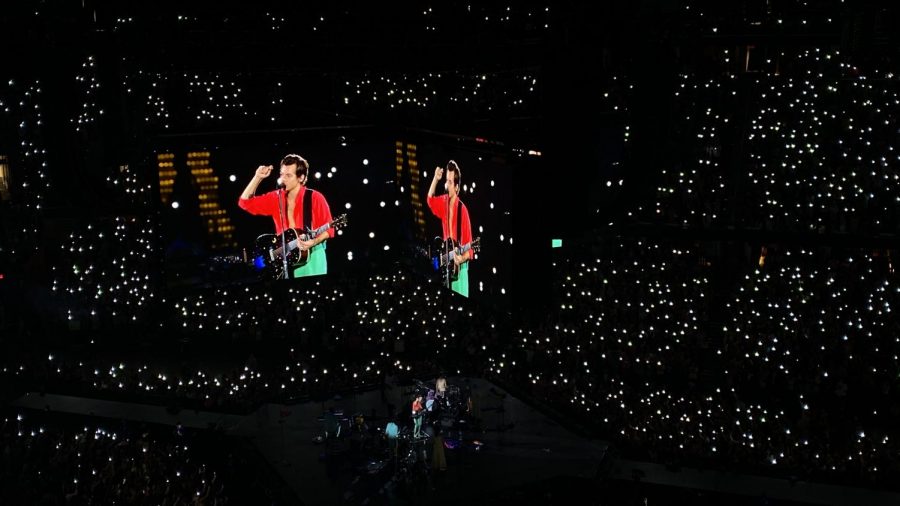 Harry Styles’ sophomore album ‘Fine Line’ sold over 393,000 copies worldwide on the album’s release date and continued to gain attention, staying at the number one spot for weeks according to Billboard. I had the amazing opportunity to attend his ‘Love on Tour’ Cleveland show for the album and needless to say I had one of the best nights of my life.

The night started off pretty tame with Styles’ pre-show tracklist playing, pumping up the entire arena. All of a sudden ‘Bohemian Rhapsody’ came on, with the entire audience singing along in unison which is the song that plays right before Styles enters the stage. The entire building screamed at the top of their lungs while he blew kisses and welcomed everyone by waving at them.

A number of songs were performed such as the main singles such as ‘Golden’, ‘Adore you’, and ‘Lights up’ to get the audience excited. People were crying and dancing like nobody was watching, making it seem like something out of a movie.

The songs that close off the show include ‘What Makes You Beautiful’, ‘Fine Line’, ‘Sign of the Times’ and ‘Kiwi’ making everyone fall silent and cry holding up their flashlights while being able to see their idol after years of having the tickets.

The concert was one of Styles’ best performances he had the entire tour, not to mention he was waving around pride flags making the show even more bittersweet for everyone. There were many interactions with the crowd which excited everyone to re-watch their concert footage the next morning.

Overall it was an amazing night that I got to witness after years with one of my closest friends. I’m so thankful I was able to attend.