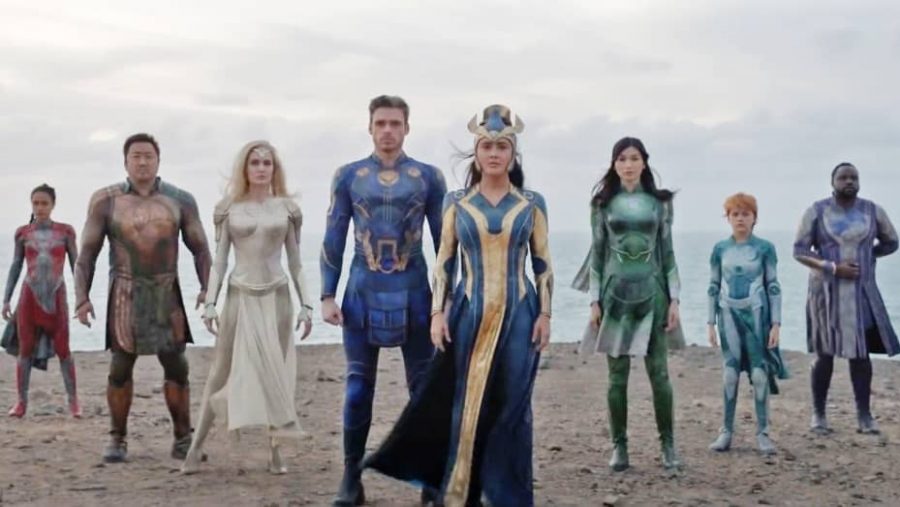 The Marvel Cinematic Universe’s 30th project Eternals is now out and has quickly become very divisive among both critics and fans alike. Seeing the film for myself I would have to say I did not enjoy it. While there were moments I liked, it was mostly a boring, pretentious mess.

This film was marketed as a different type of MCU movie. The director of this film, Chloé Zhao, had just recently won a best picture Oscar for her film Nomadland, which gave many people high expectations for this movie to be one of Marvel’s best.

Before I go over everything I did not like in this film, it is only fair to say some good things about Eternals. The highlight of this movie is the characterization of some of the Eternals, specifically Kingo and Phastos. Each of these characters made the film actually somewhat enjoyable when they were on screen. They each brought some life to a movie that was sorely lacking.

That is it. That is everything I enjoyed in this movie. While many went into the movie with high expectations because of the director’s critical acclaim, I did not, as all the promotional material and trailers did nothing to make me want to watch it. That, on top of me not being familiar with any of these characters, led to me having low expectations for the film.

The lack of the common movie-goer’s knowledge on these characters is the biggest reason why this movie was so lackluster. Unlike Guardians of the Galaxy, which was also a largely unknown group before the movie, Eternals had too much exposition to make the movie engaging and to immerse the viewer. Excluding a couple of flashbacks, Guardians throws the watcher into the world, and it is up to the viewer to put all the pieces together. Eternals is not like this and spends the entirety of the first half explaining the who, what and why which makes it boring enough to fall asleep to.

Any character who was not Kingo or Phastos was extremely boring. The person who is supposed to be the main character, Sersi, barely does anything throughout the movie until the very end where she, along with the others, saves the day. The other Eternals, Ikaris, Thena, Gilgamesh, Druig, Makkari, Sprite and Ajak are all also very boring and one-note. There are too many characters in the movie to make the audience care for them all, which then creates a split between the audience and the movie, as I was never able to be fully immersed because I did not care for any of them.

While this movie is bad, it is not the worst movie the MCU has made. Something like Black Widow, the Ant-Man movies or the first two Thor movies are somewhat worse. It is hard for me to look past the many, many flaws in this movie and to find enjoyment in it, which disappoints me as I like it when movies get creative and new. And while Eternals was creative and new, it was not entertaining or engaging.