The History of Pandemics

Since early March 2020, the coronavirus has been dominating world news and taking the lives of thousands. The coronavirus, scientifically known as COVID-19, is not necessarily a new virus. Human coronaviruses have been around since the 1960s, when the B814 virus was identified as one. Since then, coronaviruses have been known to spread like the common cold, and present similar symptoms to an average, healthy human. Those with underlying conditions such as asthma, chronic lung disease, and individuals with weak immune systems are at higher risk for complications. The COVID-19 virus has presented the same symptoms as past coronaviruses, with the same groups at higher risk for developing serious complications. While not much is known about the origin of COVID-19 yet, it’s rapid spread began around Nov. 2019 in Wuhan, China, and was kept in control around the area until it’s rapid spread was unpreventable.

Similar to the COVID-19 virus, diseases have taken a toll on Earth since the Bubonic Plague epidemic of Europe in the mid-1300s. The Bubonic Plague was considered an epidemic because it only affected one region of the world (Europe). The COVID-19 outbreak is a pandemic because it is a worldwide issue. The Bubonic Plague is also where the idea of quarantining originated from. When infected ships began to arrive in Venice, Italy during the Bubonic Plague outbreak, the ships were required to stay docked at the ports for 40 days before returning to sea. American quarantining began when the yellow fever began to spread across the United States in 1878. The legalization of quarantining led to a long history of its use when contagious diseases were found present in the United States. The most recent pandemic to affect Americans is the 2009 H1N1 (Swine Flu) outbreak. Just like COVID-19, H1N1 was declared a national emergency. However, the H1N1 outbreak was not nearly as catastrophic as the COVID-19 outbreak has been so far.

The extensive damage COVID-19 has done to the economy, the job market, and the health of American citizens has brought many to take extreme actions. Grocery stores across the nation are wiped out of essentials such as toilet paper, hand sanitizer, and face coverings. The average grocery store has checkout lines 10 carts deep, resulting in stores lowering their maximum occupancies to help thin out the crowds. Individuals that are buying items like toilet paper and Clorox wipes in bulk often do this for psychological reasons. Pandemics and uncertainty can cause anxiety, and therefore people feel the need to purchase as many essentials as they can in case they will not be able to get them again. The more people that follow this type of thinking, the more they are actually contributing to the problem. Watching others stock up on milk may compel someone else to do the same, and by the end of the day that store is out of milk. This is the case with hundreds of items across the globe. Even though it may seem like there is no toilet paper to be found, the companies that make it have not stopped production. Rest assured, there will be more toilet paper to be had soon enough.

Similar to the psychological effects that the COVID-19 outbreak has had on shoppers, this pandemic also has the potential to cause racist tensions to boil over. There is a lot of speculation as to how the virus began, but there is no question that its birthplace is China. It is very easy for racial prejudices to arise when something that has taken so many lives came from a specific place or culture. Even though this virus originated in China, that does not mean that they created the deadly disease on purpose. Although it was not as severe, the world had thoughts similar to these about Americans after the H1N1 virus began to spread. Like some have called COVID-19 the “Chinese virus,” other nationalities called H1N1 the “American Flu.” While it can be very easy to place blame on other nations for a crisis as extensive as the COVID-19 outbreak, it should not be an excuse for racism and prejudice. 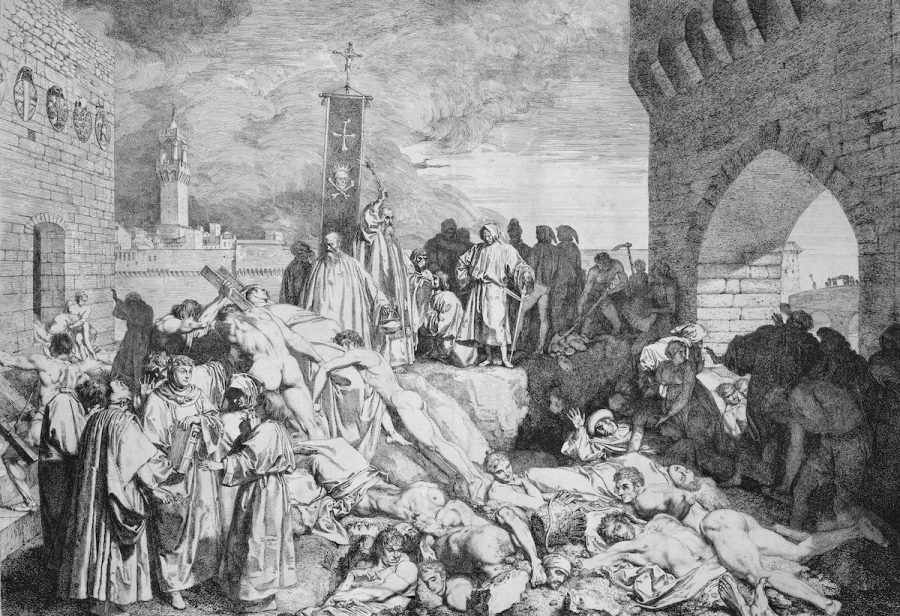 Gallery|4 Photos
Image from Asia Times
The Black Plague was the most deadly epidemic in Europe’s history, wiping out ⅓ of the total population.
Leave a Comment

If you want a picture to show with your comment, go get a gravatar.